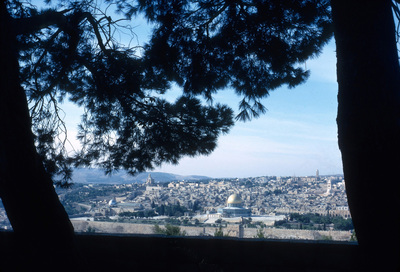 001- A view of the city of Jerusalem, with the gilded Dome of the Rock shining atop Mount Moriah or the Temple Mount. The building is said to be commissioned by the caliph Abdul al Malik in the year 691-2 CE. It is the earliest surviving Islamic monument, and one of the most important. The Dome of the Rock itself rests on as esplanade called the Haram Al-Sharif or the Noble Sanctuary, which itself has its origins in the times of Herod the Great (71-4 BC) who built the Jewish Temple on this site. The Romans destroyed the Temple in the wars of 70 and 134 CE. Under Constantine, the focus of Christian worship moved away towards the Holy Sepulcher and other Christian churches. Thus, when the Muslims took Jerusalem in 638, the site of the Jewish Temple was at best an empty dumping ground and source of spolia.