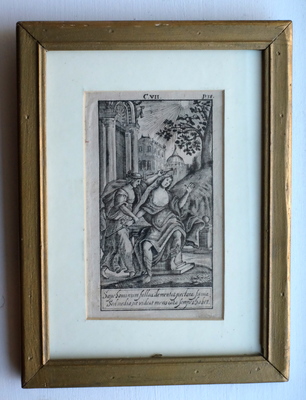 Purchased from Robert K. Riesberg in an antique shop in St. Paul, Minnesota, 1997.

This print can be identified as an allegorical illustration from the seventeenth-century Scottish satirist and neo-Latin poet John Barclay’s Argenis, a political romance novel and work of historical allegory. Told from the perspective of a king who reduces the power of aristocrats in favor of his country, Argenis applies royal absolutist theory to European politics to highlight the importance of obeying divinely appointed kings for political stability. Argenis chronicles French religious conflict under Henry IV (r. 1589-1610) through the language of literary and pictorial allegory, or the story of Argenis as the priestess of Athena and the daughter of King Meleander of Sicily (symbolizing the French throne) in which Sicily represents France. Originally published in 1621 in Paris, Argenis was printed in more than fifty editions, translated into various languages, and was read and admired throughout Europe.

Based on format and design, this print most likely was printed by the Nuremberg Publisher, Sumptibus Wolfgangi Mauritii Endteri. It has been cut from the book, glued to cardboard and inserted into a frame. This print was produced by the method of copperplate engraving in which the artist etched the intended design directly onto the surface of a copper plate with a steel engraving tool called a burin, guiding it to achieve such pictorial techniques as “cross-hatching” (parallel lines crossed at angles) as seen in this print. This technique of engraving originated simultaneously in 15th-century northern Italy and the German Rhine valley, developed by goldsmiths. Once the plate was coated in ink, a cloth was used to push ink into its incisions and buff the excess ink from the flat areas. Then the plate was covered with damp paper and rolled through a press, transferring the ink from the engraved lines to the paper. Above the illustration are the chapter (7) and page number (38) that help the bookbinder determine the relationship between text and illustration. Many editions contain illustrations like this print, which recommends the book to a courtly audience, and emphasizes the narrative’s political and moral lessons.

Starring Argenis and her servant Selenissa, this print depicts the scene from the book in which Argenis hears a rumor of her lover Poliarchus’s death and is prevented from killing herself by Selenissa, who grips Argenis’s right hand clutching a dagger. The artist uses the popular Renaissance aesthetic trope of women as allegories to advance a moralistic message. Set against a background featuring classical architectural elements implying a recession into space through perspectival systems developed in the Early Modern era, Selenissa holds a telescope in her left hand. The epigram from Barclay below reads, “Saepe hominum fallax dementat pectora fama, sed media, ut videat mens cata semper habet”, which is roughly translated as “Often the hearts of men are deceptive and irrational, but in middle ground you see one has a clear mind.” This caption warns one to think before they act and to keep a clear mind in the midst of crises. In this print, Selenissa personifies the “mens cata” (clear mind).