View of Castel Sant'Angelo and the Cupola of St. Peter's Basilica

Photogravure (half photo, half print)

The photogravure serves as a visual compaction of Rome’s history, in which structures from antiquity to modernity are stratified to form a tangible vision of heritage. Rome is spread out before the viewer from the point of view of a bridge over the Tiber River, the lifeline of Rome. Across the river to the left stands Castel Sant’Angelo, a rotund fortress that parallels the cupola of Saint Peter’s that looms above everything else. Saint Peter’s Cathedral is a manmade landmark, but it peaks above the city as if a mountain, emphasizing the monumentality of the Catholic Church within the Italian cultural landscape. The leaning architectural lines and weathered facades of the buildings on the other side of the Tiber mirror the haphazard deposition of the storied city.

The panoramic view is multiple exposures stitched together. Early wet process panoramas were made by attaching multiple plates together, but the seams between the images were more defined. Nearing the 1860’s flexible film allowed for more continuous panorama’s which reduced the appearance of a seam between exposures. The photographer likely made the exposure in the 1860’s with a Pantoscopic camera.

The site of Castel Sant’Angelo has varied from a space with Pagan, Christian, and secular functions that reflect the conglomerate nature of Roman cultural history. Additionally, Castel Sant’Angelo has had a special relationship with Saint Peter’s, their proximity was no accident. The site was first a funerary monument for the Roman emperor Hadrian from 128-139 DC. Sculptures and reliefs depicting Hadrian as a sun god dotted the monument. During the Middle Ages, the site functioned first as a fortification connected for the Vatican and the first Saint Peter’s basilica and was later converted into apartments for the popes. The site received its name from a religious episode in which the archangel Michael appeared to Pope Gregory I. During the Napoleonic era it became occupied by the French but upon their retreat they wrought havoc on the structure destroying much of it beyond reasonable or immediate repair. Starting in 1822, efforts to restore the early antique tomb, later resulted in a general restoration of the entire site. The twentieth century saw the cite’s transformation to a site of cultural heritage, more secular, functioned as a safe house fortified enough to protect art during WWI restoration of the structure up to 1878. Following the world wars the Castel transformed from military fortification to civic monument.

Photographing ruins serves as a tangible way to monumentalize our abstract past. The medium of photography shrinks space through immediacy and connectivity, they memorialize the past and present in tangent, functioning in similar ways to the layering of Roman architecture. Purporting a static or frozen moment, photographs pay tribute to the romanticized notion of disrepair, in which ordered manmade structures give way to inevitable decay. 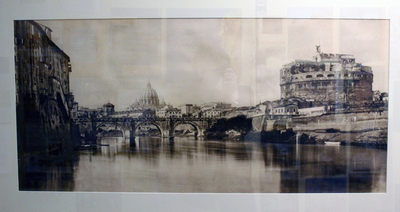