Breastplate Decorated with a Cross and Concentric Circles 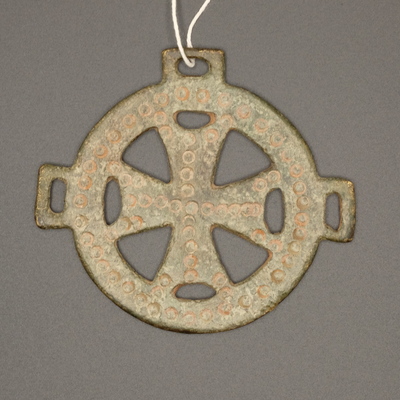 Purchased by David P. Harris from Julia Schottlander (Tetragon) in London in 1991.

This breastplate for a horse’s harness is circular in shape, with three rectangular loopholes protruding from the perimeter, and a cross design at the center. While the front is covered in concentric circles, the back has no surface decoration. The breastplate would have been worn in front of the horse's torso and secured around its body. A similar breastplate, discovered in a fifth-century tomb in Nubia and now worn by a model horse in the Cairo Museum, demonstrates how such an object would have been worn. The rider would attach the breastplate to the front of the horse by straps in order to secure the saddle on the back. The breastplate, complete with the harness, gives a glimpse into the decorative elements that were always present with this sort of equipment.

Horse racing was a popular sport in the Byzantine Empire, and the people of Constantinople took seriously every aspect involving their horses, including breeding, training, and health. Trainers were quite superstitious, and would do anything to get ahead, such as using dark magic to their advantage and employing religious symbols to combat these spiritual forces. It was a widely held belief that a cross would ward off evil spirits, and concentric circles—signifying mirrors—also had the power to deflect harm. Therefore, this harness could have been used to banish the unseen spirits away from the horse and the rider for protection in races and in battle.

Anne McCabe, "The Horses of the Hippodrome," in Hippodrome: A Stage for Istanbul’s History, ed. Brigitte Pitarakis (Istanbul: Pera Museum, 2010), 69–81.