The Antiquities of England and Wales by Francis Grose aimed to provide 18th-century readers with general knowledge about medieval architecture in England and Wales. Grose and his publisher hired multiple engravers to work on the publication, including Samuel Sparrow, who was known for his etched or engraved renderings of ruins in Cumberland, Durham, and Essex. This etching is one of Wenlock Monastery in Shropshire drawn in 1771. This single page features part of the description of the monastery and the Sparrow engraving of a distant view of the ruins.

Wenlock Monastery was founded in 680 by King Merwald of Mercia, and his daughter Milburga was named its abbess and later canonized. After the Norman conquest, the monastery was reestablished as a Cluniac monk priory in the thirteenth century. The Sparrow engraving features what remains of the thirteenth century English Gothic-style church. The partial entry written by Grose discusses the monastery’s founding, ownership, and operation over the course of several centuries. In the full entry, Grose also recounts the present condition of the monastery’s remains and a mid-eighteenth century attempt to use part of the ruins to rebuild nearby houses. Further attempts at destroying the monastery were blocked by Sir Watkin Williams Wynn, and today the ruins are preserved and maintained as an official English Heritage site.

In his introduction to Volume I, Grose explains that these descriptions were written “solely for the use of such as are desirous of having, without much trouble, a general knowledge of the subjects treated of in this publication.” In other words, Grose’s intended reader was someone who was not already familiar with the subject, but who sought brief and informative overviews of these sites. They afforded readers the opportunity to “see” and learn about many ruins and historic sites without having to travel there in person.

Although well-received by the public and republished in its entirety in 1783, Grose faced sharp criticism from other antiquarians about The Antiquities of England and Wales. Antiquaries in eighteenth century Britain still focused primarily on classicism, and were especially resistant to linking antiquarianism with medievalism or medieval architecture. That Grose’s work focused on British medieval sites was in direct opposition to the prevailing antiquarian sentiment, and marked both a tension and shift in antiquarian and medievalist research and practice. After the French Revolutionary War in 1802, however, when Britain was virtually isolated from the rest of Europe, public and scholarly interest in British antiquities grew. This burgeoning interest was reflected in the Society of Antiquaries’ increased membership and their willingness to publish research and volumes on medieval architecture. Thus, although The Antiquities of England and Wales was met with mixed reviews, its emphasis on British medieval sites foreshadowed a broader shift and interest in antiquarian research while also managing to preserve and share views of significant architectural sites with a large audience. 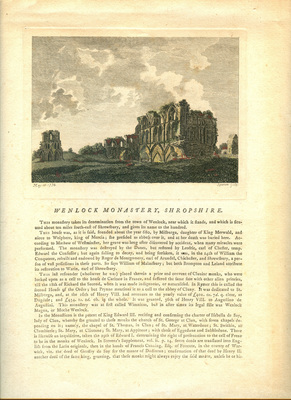