Four judges in traditional robes and wigs sit in court in various states of slumber and disinterest. Hogarth captures his subjects with a satirical wit. Although never finished, this engraving demonstrated the difference between "character and caracatura [caricature]." While the figures in the lower register depict the corruption in the legal system, their flaws are rooted in reality. The heads above, however, are drawn in an exaggerated fashion, suggesting parody. The Bench was one of Hogarth's final engravings.

The Works of William Hogarth, Vol. II, Published by The London Printing and Publishing Company, 1850. " A fac smile of hogarth's own engraving, intended to show the difference between character and caractura." After an oil painting from 1758. Print differs from painting. Judges identified as Lord chief Justice for Sir John Willes, the principle figure; on his right Sir Edward Clive; on his left, Mr. Justice Bathurst, and the Hbon, William Noel. 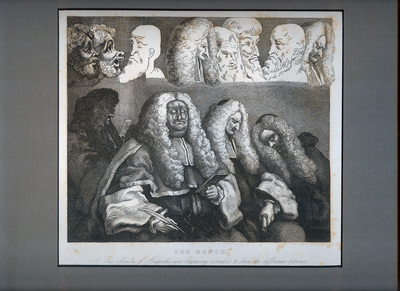