View of the Encampment in Hyde Park, from Marshal Sax's Tent.

During the late 18th century, London's Hyde Park was often used as a space for military exercises and encampments. In this scene, British regiments that pacified the anti-Catholic Gordon riots of 1780 are seen standing around a portable shelter in the park. In the aftermath of the uprising, the scene is peaceful, with its rolling clouds, large trees, and lounging troops.

"Published by John and Josiah Boydell at the Shakespeare Gallery; an engraving of the "Seats of the Nobility and Gentry of Great Britain and Wales, after eminent artists." Plate XCIV. Published as the Act of Directs by G. Kearsley, Sept. 1. 1780. Engraved by F. Chesham (1749-1806). 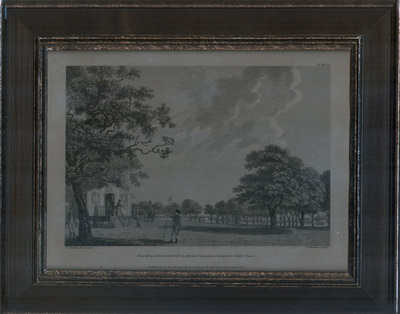