Shylock After the Trial

In this finely done engraving, Shylock, the principal antagonist from Shakespeare's The Merchant of Venice, is seen leaving the court after his trial, arms raised in frustration and defeat. Children run after him and taunt him, as citizens confer in the background.

From Gilbert's illustration to Shakespeare's "Merchant of Vencie" done in 1866 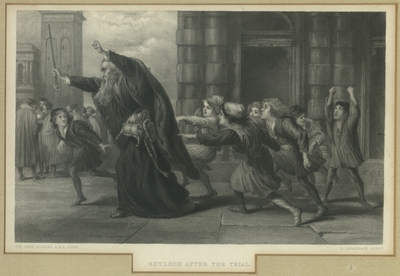