Suggested by the inscription and seal name on the top, these two paintings (2020.494, 2020.495) are renditions of Chinese ink painter Li Keran’s Over the Mountains as if the Forests are Dyed series in the 1960s, which originally includes seven landscape paintings in expressive styles. Besides four privately owned paintings, there is one each at China Academy of Art, Fine Art Museum of Research Institute of Traditional Chinese Painting, and Rong Bao Zhai. The title of the painting is indicated by the calligraphy at the top and is taken from a line of Mao’s poem, Changsha, describing a magnificent autumn sight he saw standing by Xiang River in Changsha. Echoing Mao's poem, through the application of wet ink, the massiveness of redness, and repetitiveness of decorative brushstrokes, these two paintings present a composed Southern-China scenery with a monumental mountain at the center, a waterfall at its side, and some houses to indicate human existence. To illustrate depth, the artist employed different transparent levels of ink and drew smaller surrounding mountains. The dotting and repetitiveness of brushstrokes weaken the verisimilitude between the paintings and actual nature. Instead, they add more decorative values to the paintings. Unlike oil painters, the artist intentionally left spaces unpainted to incorporate the Daoist idea of Qi(breath), injecting a sense of liveliness and coherence into the paintings.

This expressive mountain landscape with bold brushstrokes is called xieyi shanshui, often associated with the traditional Chinese literati, a group of highly educated people who are interested in literature, calligraphy, poetry, and art. A xieyi shanshui conveys painters’ inner ideas and pursuit through abstract images with a combination of natural landscapes. However, after 1949, for the political and ideological purpose of propagating the new government, the traditional literati were criticized for being bourgeois and unrepresentative of the proletarian public. Li differentiates himself from conventional styles by employing polychromatic paints, which were originally considered vulgar since traditional literati painters only used monochrome paints to convey their personal ideals. He combines literati painting’s formal styles with new China’s ideological indications, presenting a revolutionary landscape injected with propagandistic demonstrations. The massive usage of red ink not only represents maple leaves in the late autumn but also symbolizes and alludes to the color of the Chinese Communist Party, indicating that this ‘prosperous and magnificent landscape’ is now governed by the new China.

In the 1990s, the introduction of the art market in China increased the supply and demand of art-collecting, as a way to show one’s status, wealth, and connoisseurship. It thus popularized the imitation-copying of famous artists’ works. In 2012, one of Li’s Over the Mountains as if the Forests are Dyed was sold for over 40-million dollars and another sold for 20-million dollars in 2015. After his paintings were sold for record prices at auction, more artists tried their hands at his style, and these two renditions are examples of such imitations. 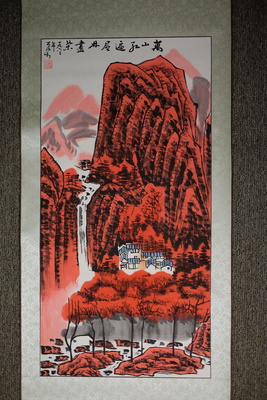