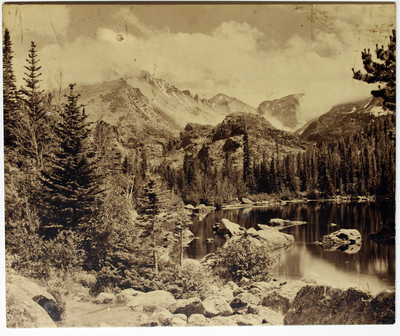 Colorado photographer, Otto Roach spent his life documenting the Colorado landscape. In 1935, Otto Roach opened Roach Photos, the first full-service photo lab and fine art gallery in Colorado. Roach propelled the photographic medium during this time when more advanced cameras became accessible to amateur photographers. He was inspired by this new wave of economic growth brought upon by the westward movement in the 19th and 20th centuries. Growing architectural landscapes captured Roach’s interest, who documented entire cities in mid-development, shedding light on structural advancements of the time.

Later, with the construction of the Trail Ridge Road, photographers like Roach were inspired to explore previously unseen areas of the park. Road construction began on September, 1929 and lasted until July, 1932. The prior route surrounding the Rocky Mountain was often perilous due to the frequent snow slides and deep snow. Additionally, the narrow road offered limited scenic views with restrictive exploration. With the new road, venturing further up the mountain and capturing unseen areas led many photographers to explore these areas. Documenting the snow-covered peaks in the winters and lush valleys in the summers drew the attention of tourists who were hoping to be part of this historic milestone.

Captured in the photograph are Longs Peak and Bear Lake. Longs Peak towers above all the other summits at 14,259 feet. In those days only the most adventurous dared to climb the sheer vertical rock faces, where often falling rocks and narrow ledges posed a hazard on explorers. Bear Lake offers a scenic view for hikers with its crystal-like water fed by the snow from the mountain. The water offers a mirror-like surface reflecting the picturesque landscape around. This photograph captures the tranquil harmony of the land. The rocky landscape contrasts the green rolling hills and wildflowers on other parts of the park. Several species of pine trees line the edge of the lake, breaking up the rocky scene and giving the photographer a more fascinating view. The tall peaks converge harmoniously with the clouds depicting a pleasant relation between the natural elements.

Tourists sought to document these never before seen areas and capture their rarities before industrialization manifested itself in the West. The pines, stones, paths, and wildflowers were bound to be polluted by others attracted to their beauty. This scene captured by Roach in 1935 is no longer there. Humans are an inevitable threat to nature. We are neither inherently good nor bad, just a natural force altering the untouched for our keeping.