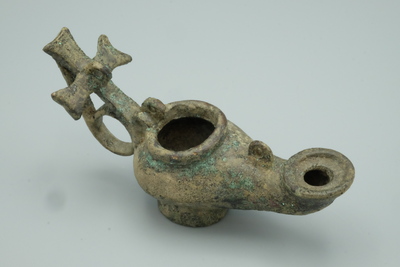 Purchased by David P. Harris from Julia Schottlander (Tetragon) in London on October 16, 1993.

This domestic hanging oil lamp, cast from bronze, has a looped handle in the shape of a cross. The cross is the focus of attention and is nearly half the length of the lamp. A round hole for filling oil is in the middle, and a long neck with a smaller hole for the flame is at the end. A lid, no longer present, was hinged by the two holes just behind the center filling hole. A lamp at the British Museum (no. OA.852) shows how such lids were attached. Another lamp at the British Museum (no. 1897,0820.1) with two suspension loops, one on the head of the dragon-shaped handle and one on the neck, would have been used to hang the lamp from a bracket on the wall or from a lampstand. Being made of bronze, these smaller bronze lamps were found in upper-class homes and typically used olive oil as fuel. It would have functioned as a source of light within domestic spaces during meals or banquets. Also, they may have been used in conjunction with fragrances to replicate the experience that typically occurred in a church. This type of lamp is significant because it shows how early Christians utilized Christian iconography in the private sphere.