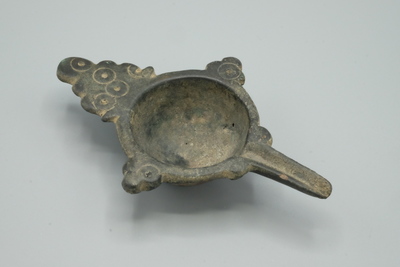 This object consists of a small bowl, a long pouring spout and flat handles. It has been suggested that objects like this were used to mix cosmetics, which could then be poured into narrow-neck flasks. For a similar object, found in Nishapur, see James Allan, Nishapur: Metalwork of the Early Islamic Period (New York: The Metropolitan Museum of Art, 1982). p. 75, fig. 81.