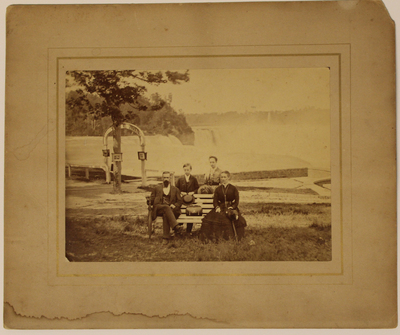 Photographs have always been a staple of the family vacation. This 19th century souvenir photograph of a couple and their two children at Niagara Falls represents an early example of such tradition. The family takes up little space in the composition, as the focus is on the falls. Even though the heightened exposure washes out the falls its presence overwhelmingly dominates the scene, creating a white gash in the middle of the composition. The family, whose identity remains lost to history, appears to be dressed in their Sunday best. This photographs was most likely taken to commemorate their visit to Niagara Falls, which since the 1830s has been a popular American tourist destination.

With no geographic equal in Europe, Niagara Falls has historically occupied a unique place in the American imagination. Its unmatched scale and seemingly infinite flow of water made aptly embodied notions of American abundance and aspirations. Early American visitors framed the falls as a religious, awe-inspiring sight, closely associated with the country’s promise of cultural renewal. Many travellers called themselves “pilgrims,” following guides across slippery rocks and wind blasted pathways, equating their journey with Old World pilgrimage trails in Jerusalem, Rome, and Santiago de Compostela. Getting at the immense profundity of the site, guidebook writer J.W. Orr describes the viewing the falls as such: "Crowding emotions swell the bosom; thoughts that defy utterance fill the mind. The power and presence of the Almighty seems fearfully manifest.”

The expectation that the falls would provide an intense emotional and spiritual experience, as promoted by 19th century travel guides and popular literature, often overshadowed one's actual encounter. Guidebooks like Orr’s placed a heavy burden on spectators to encounter the falls in a certain way, an expectation often left unmet if experienced “incorrectly.” For example, the family is photographed at Prospect Point, a lookout station that one guidebook cautioned against going to as the first destination on the Niagara pilgrimage:

“Here the falls are seen in profile, and the line of the their length is as it were, foreshortened. Moreover, from is point of first observation the height of the falls seems much less than when they are from below. It is better to insist on seeing Niagara first from its base. What we look down on never seems so great as what we must look up to.”

While it is unknown how these particular tourists reacted to the falls at Prospect Point, one can assume there was some level of anxiety over whether or not the trip would be worth it, as with any vacation. Although their experience perhaps deviated from the norm, the family subscribed to conventional ways of remembering their trip. Their dignified portrait formally stresses their smallness in the face of the sublime, aligning the memory of their visit with established impressions of the impressive site.