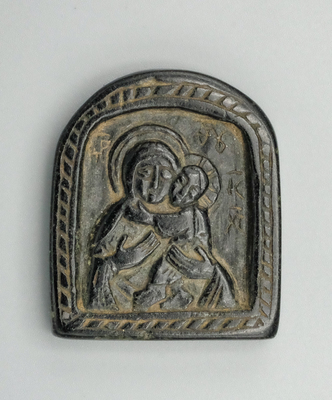 There are two small scratches on the outer ridge and on the surface of the arched frame on Saint Nicholas’ side of the icon. A layer of dirt is embedded into the carved figures, revealing an artificially heightened definition in the details of their clothing and background inscriptions. Saint Nicholas’s face has some wear compared to that of the Virgin and Christ, likely because this object was previously framed in metal and worn as a pendant with Nicholas’s side resting against the wearer’s chest. September 2022. - Stephanie Chang ('25)

Brad Hostetler, with Ani Parnagian, "From Private to Public: The Collection of David P. Harris," in Ethiopian Objects in the Blick-Harris Study Collection: Art, Context, and the Persistence of Form, eds. Brad Hostetler, and Lynn Jones, Peregrinations: Journal of Medieval Art & Architecture 8, no. 1 (Spring 2022): 5–25. https://digital.kenyon.edu/perejournal/vol8/iss1/1/

This two-sided stone icon features, on one side, the Mother of God holding Christ, and on the other side, Saint Nicholas, represented in a bishop’s clothes. Each figure is identifiable by their accompanying inscriptions engraved near their heads. Made from black steatite, the surface is glossy with details conveyed through relief. The image on the front, that of Mary and Jesus, is bordered by a simple, rope-like pattern on an arched and raised frame, whereas the border on the back, surrounding the image of Nicholas, is unadorned and flat.

The image of the Mother of God and Christ follows a composition known as the Virgin Eleusa icon, or the Virgin of Tenderness, with Christ nestled against her cheek and his arm wound around her chest. Emphasizing this maternal depiction is a sense of hieratic scale; her face, positioned at the top of the composition, wears a serene expression. Her hands, emerging from long, draped sleeves, return this embrace and pull Christ inward, safeguarding him. While his gaze is fixed on the Mother of God, her eyes stare out at the viewer.

The image of Nicholas presents the bishop in a gesture of benediction to the icon’s holder. He is frontal and gazes back to the viewer, giving a two-fingered blessing with his right hand and holding a book in his left. His halo, denoted by a single carved ellipse, emphasizes his head and the composition’s bilateral symmetry, save for the differences in hand gestures. The Mother of God’s halo, comparatively, appears smaller and hugs her head closer. Slightly below and to her left, Christ’s halo is carved out into a thicker band, with vertical lines protruding from his head like rays of light and creating a difference in texture.

The carving of Saint Nicholas is in style different from that of the Mother of God and Christ. His form is rendered in a lower relief, and his body appears to be pressed against the picture plane. The side with the image of the Mother of God and Christ exhibits greater modeling of the figures and individual details on the bodies. Such a visual contrast might suggest that two different craftspeople carved these images at separate points in time.