Pendant Cross with John the Baptist 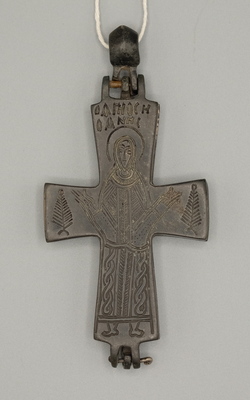 Purchased by David P. Harris from the Antique Shop in the Hilton Hotel in Istanbul on April 20, 1968.

This pendant cross featuring John the Baptist has an opening loop at the top enabling the cross to be worn. On the cross, John the Baptist adopts a significant presence with features not aligning with anatomical normalities. The narrowness of his face places an emphasis on his halo indicating his divine status. Inscribed into the surface, the figure is bordered by two trees, emphasizing John the Baptist’s connection to nature. At the most superior position of the cross, “St. John” (ΟΑΓΗΟC/ΗΟΑΝΗC; Ὁ ἅγιος Ἰωάννης) is inscribed in Greek, confirming the identity of the abstract central figure.

The reverse side of the pendant features an image of an incised cross with flared arms. There are also five circular insets, one at the center and four on the peripheral corners, that could hold glass or stone. Besides functioning as an accessory, the cross can serve as a reliquary and a shrine for saints. The interior portion of the cross can be fastened by a pin to enclose small objects that could offer a sense of protection for the wearer. Purchased in Istanbul in the 1960’s, this bronze work could have been made in molds and mass produced, allowing it to be accessible to a wide range of social classes. The pendant cross with John the Baptist is a quintessential piece from the Middle Byzantine period that exemplifies acceptance of iconographical figures and devotion to Christianity. Wearing this cross legitimizes an individual’s preparedness to experience a positive transition to the afterlife.

John the Baptist's connection to a higher power is emphasized by his central placement on the cross and physical abstractions, merging the boundaries between heaven and earth. This abstract representation of John the Baptist is characteristic of popular imagery that emphasizes a sense of personal assistance and intercession for the wearer. In contrast, the naturalistic and stern depiction of John the Baptist on the plaque at the Victoria & Albert Museum (no. 215-1866) is characteristic of imperial workshops that emphasize a sense of judgment and hierarchy. John the Baptist’s ethereal nature on the pendant cross does not come across as having a tangible presence on earth, disconnecting the observer from being judged or analyzed in the present. The pendant cross provides reassurance of an individual’s hope for protection in life and death.

Anna Kartsonis, “Protection against All Evil: Function, Use and Operation of Byzantine Historiated Phylacteries,” Byzantinische Forschungen 20 (1994): 73-102.

Karen Sonik, “Pictorial Mythology and Narrative in the Ancient Near East,” in Critical Approaches to Ancient Near Eastern Art, eds. Brian A. Brown, and Marian H. Feldman (Boston: De Gruyter, 2013), 265–293.