This wood-carved engraving is based off of stanza from Thomas Gray’s poem, Elegy Written in a Country Churchyard written in 1750. The print itself was created by Agnes Miller Parker, and was featured on a page in an 1938 edition of the poem. The book contains 32 full-page wood engravings by the same artist that were sketched in the same churchyard in Britain that Gray’s poem is based on.

Although this print matrix was made out of wood, a wood engraving is different than a woodcut and a metal engraving. For woodcuts, one carves out areas of the image that they do not want to be printed. A wood engraving is part of the intaglio family of printmaking where the ink is put into the valleys of the matrix, which is the opposite of a woodcut. The lines that are printed are the ones that were cut away. Since this work was featured in a book, on the reverse side of the print is stanza 18 of the poem, making stanza 17 the section of the poem that the image is based off of.

[…] nor circumscrib'd alone Their growing virtues, but their crimes confin'd; Forbade to wade through slaughter to a throne, And shut the gates of mercy on mankind,

The struggling pangs of conscious truth to hide, To quench the blushes of ingenuous shame, Or heap the shrine of Luxury and Pride With incense kindled at the Muse's flame.

On the left side of the print we see a farmer hunched over hard at work. He sleeves are rolled up and his hands are gripped on the wooden scythe. His body and clothes are dark, as light reflects off of his hands and matches the halo of light that surrounds him. The figure is surrounded by different kinds of landscapes and textures, but his line of vision is directed towards the battle scene in the right corner of the print. There is a long black line that separates the two stories from one another. As our eyes cross over this line, we see two different shaded flags that represent different sides fighting each other with swords and horses. Above this battle is a mysteriously empty throne, a reference to the line in the poem, “slaughter to a throne”.The battle scene is completely in the shadows compared to the quiet farmer. It is important to notice how both stories utilize light to show tone, mood, and death. Miller’s print in reflection to Gray’s poem uses shading to evoke the same theme of death and remembrance.

In literature an elegy is a reflective work that typically deals with death and mourning. Gray’s poem is a meditation on death contemplating how remembrance can be good and bad. The author’s life was filled with death. Between the loss of family members and childhood friends, Gray was thinking about death quite often. 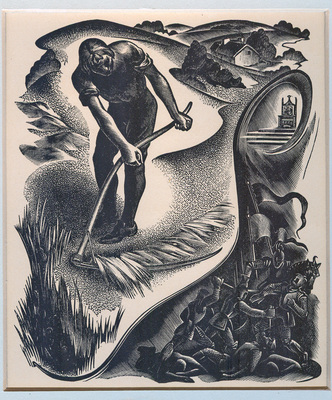